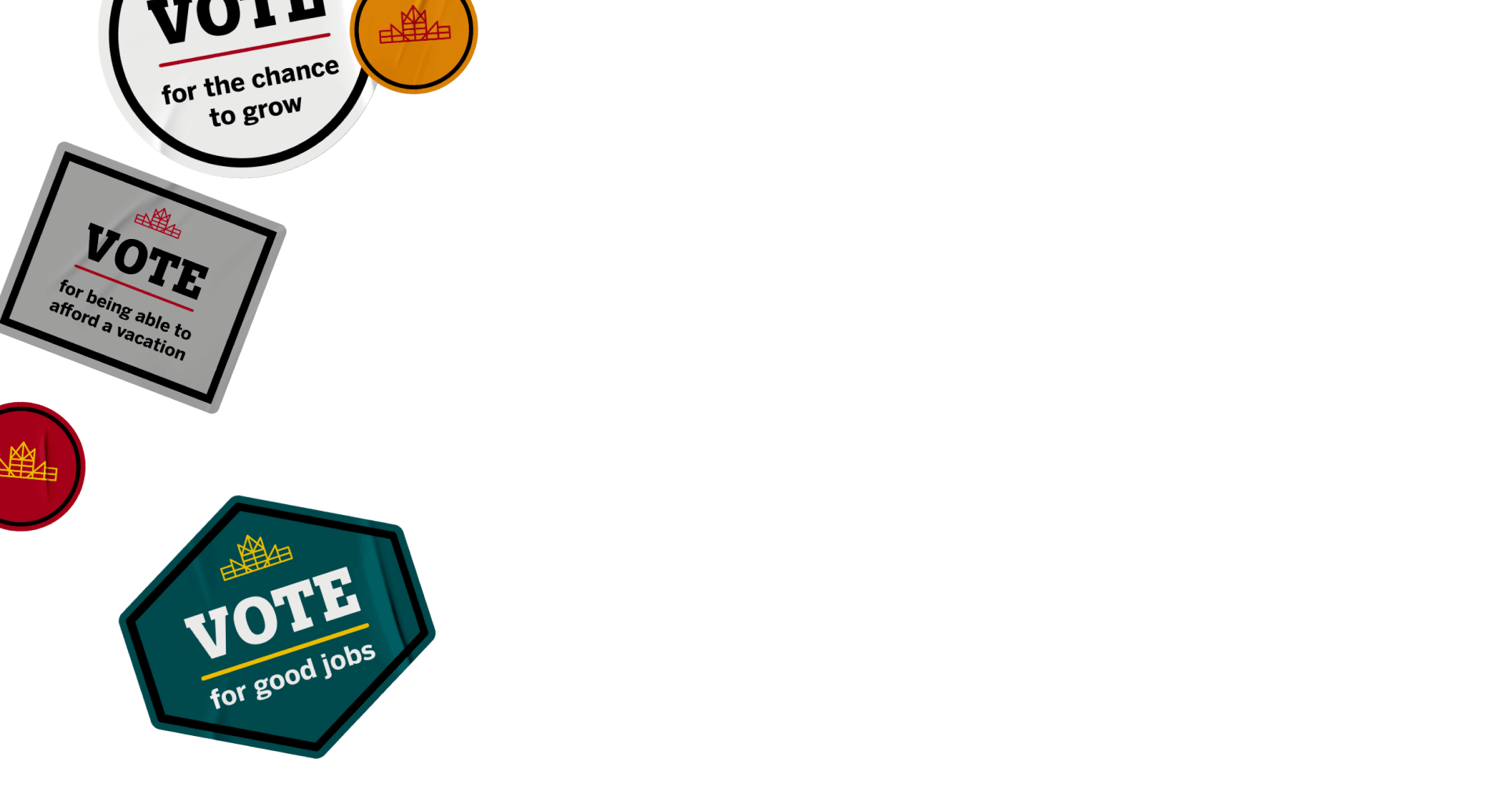 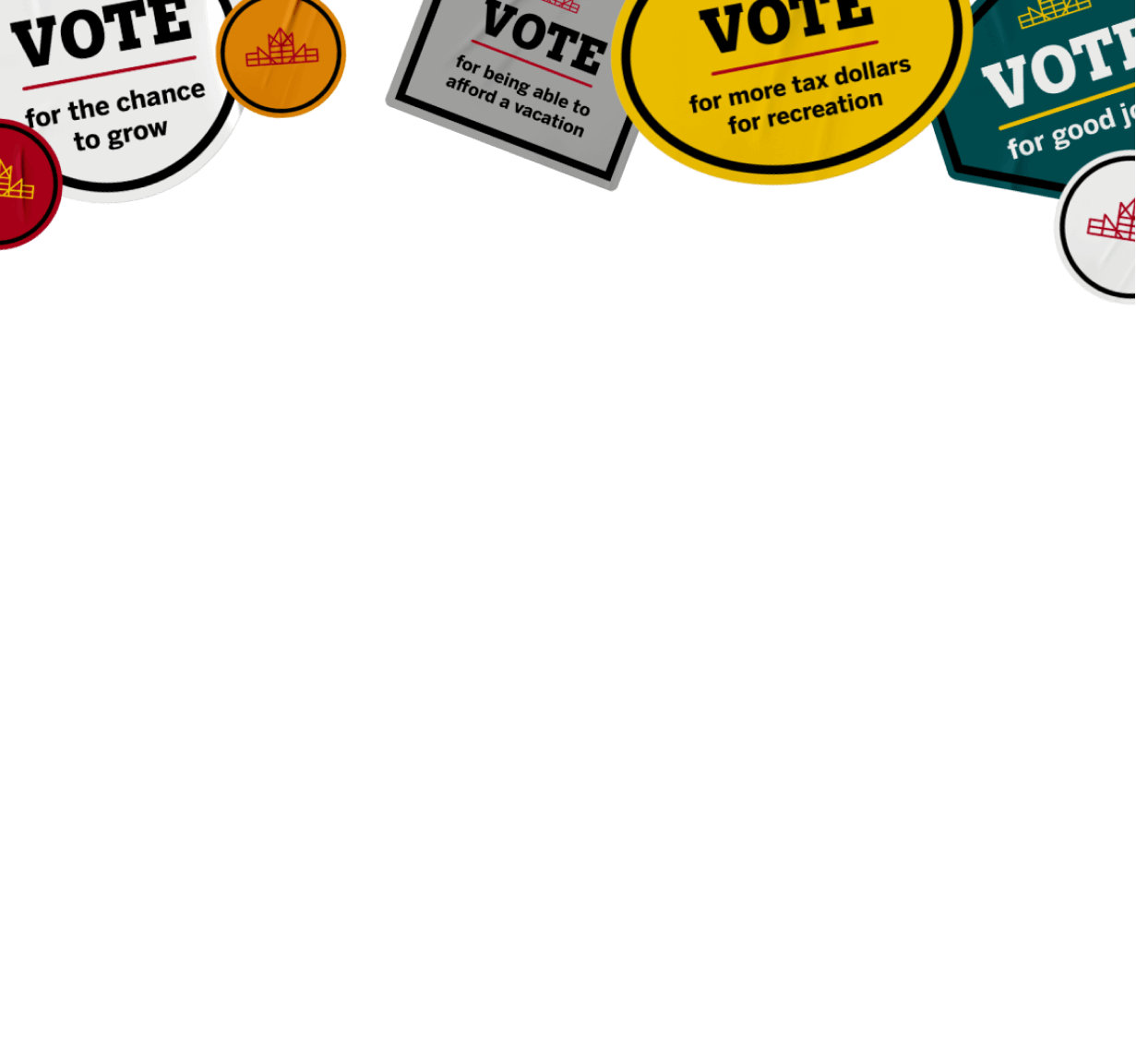 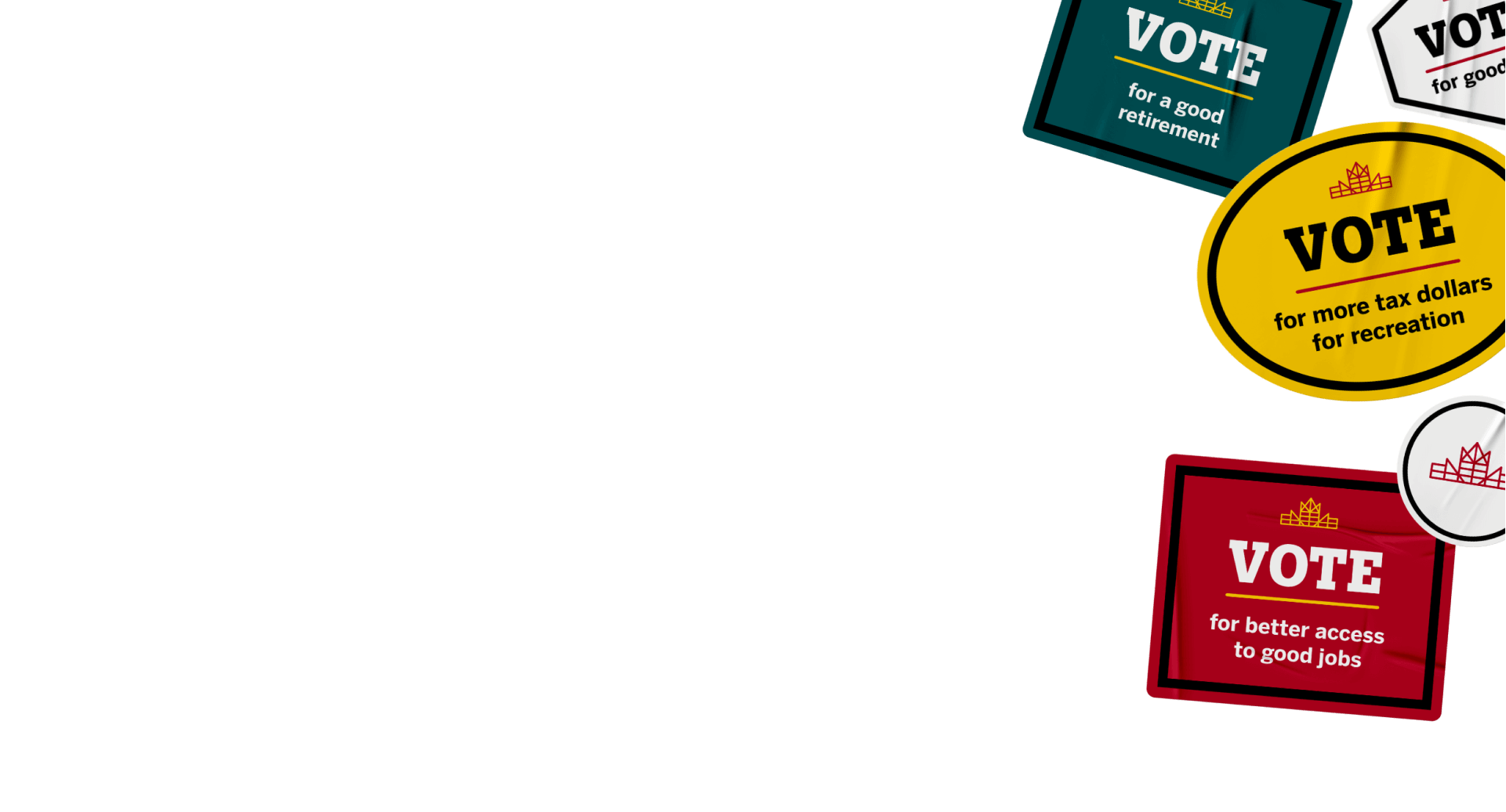 Measuring Where the Parties Stand

As the parties release more information and speak to their positions on issues important to Canadian workers, Let’s Build Canada will  keep you up to date on where they stand.

Where the Liberals Stand

The Liberal Party released its platform Wednesday morning, delivering a package of promises with strong benefits for working Canadians.

For construction workers, one of the Liberals' strongest promises for our workers is introducing a Labour Mobility Tax Credit. They are committing to allow workers in the building and construction trades to deduct up to $4,000 in eligible travel and temporary relocation expenses. The policy would give them a tax credit of as much as $600 per year. Let's Build Canada has advocated for policies like this, and we're pleased to see it in the Liberal platform.

The Liberals are promising to introduce a new Employment Insurance benefit for self-employed Canadians that would provide up to 26 weeks of assistance at rates comparable to EI. They're committing to expanding the system to cover all workers, including seasonal workers. Their plan also envisions setting up an EI Career Insurance Benefit for workers who have worked for the same employer for five or more years before the business closes, which would provide additional benefits in the two years following the layoff.

The party envisions new supports for unions, particularly introducing legislation to prohibit the use of scabs by federally-regulated employers. They intend to double the Union Training and Innovation program to support more apprenticeships across Canada, and to establish a new Apprenticeship Service to connect 55,000 apprentices in Red Seal trades to job opportunities.

On the transition to a green economy front, the Liberals are promising to launch a National Net-zero Emissions Building Strategy, aiming for net-zero emissions from buildings by 2050, on top of continued grant programs for home retrofits. The party plans energy sector investment aimed at "making Canada the most reliable, cost-effective and carbon-free electricity producer in the world." The Liberals' plan for a just transition for the energy sector includes setting up a $2 billion Futures Fund for Alberta, Saskatchewan and Newfoundland and Labrador and a Clean Jobs Training Centre for workers in the industrial, skill and trade fields, helping them upgrade and gain new skills for the low-carbon energy sector.

Together with promises like building 1.4 million homes for Canadians and providing 10 days of paid sick leave, the Liberal platform has a strong cross-section of policies that will benefit Canadian workers. Let's Build Canada is pleased to see the needs of workers reflected in the party's plans going forward.

Where the NDP Stands

NDP Leader Jagmeet Singh’s platform lays out a promising selection of policies that will benefit workers, particularly in terms of training. The party promises to require big companies to spend at least one percent of payroll per year on employee training, and they’ll change Employment Insurance rules to allow workers who choose to leave their job to go to school and upskill or reskill to qualify for EI, while strengthening the system overall. They’re also promising to begin working on a guaranteed livable income for all Canadians.

On the climate change and construction fronts, the NDP is promising to create more than a million good jobs across Canada by investing in nationwide green infrastructure. Moreover, they’re promising to require the use of Canadian-made steel, aluminum, cement and wood products for projects across the country. And in line with what Let’s Build Canada has advocated for, they’re vowing to retrofit all buildings in Canada by 2050, with an ambitious program of requiring large-scale retrofits in all sectors.

The NDP’s policies lay out a plan for a just transition for Canada’s energy sector. “The workers most impacted by the changes in our economy cannot pay the price of action on climate change,” the party says, promising a wide range of supports, including ensuring companies retain and redeploy workers during low-carbon transitions and providing for expanded EI benefits, re-training and job placements to create a path to good jobs. The party also vows to ensure workers close to retirement can claim their pensions without penalty if they choose to retire early.

Where the Conservatives Stand

Despite the Conservative Party’s anti-union history, the Conservatives are taking a different tone this election and moving his party platform to the middle looking for votes from typical Liberal or even NDP supporters . During his time in Parliament, O’Toole voted to support Harper-era laws that made it harder for workers to join a union and easier for union busting drives to decertify workers from a union while burdening them with excessive and unnecessary reporting requirements. He voted against anti-scab legislation and proposed legislation that would make it easier for companies to compromise on pension obligations during insolvency.

This election, the Conservatives have come to the table promising to fund training programs and make it easier for Canadian workers to accept jobs across the country. Most notably, in their platform they have committed to supporting a tax credit for skilled trades workers. They have also promised to introduce low interest loans of up to $10,000 to Canadians who want to upgrade their skills, $250 million to create the Canada Job Training Fund and have committed to doubling the Apprenticeship Job Creation Tax Credit for employers.

The Conservative Party platform says they will level the playing field between unions and multinationals by consulting with union leaders and then implementing changes to the Canada Labour Code to remove barriers that prevent unions from organizing large employers with a history of anti-labour activity. The Conservative platform says they will also commit to working with unions to modernize the Canada Labour Code.
‍
The Conservatives’ policies concerning climate change are both less opaque and less encouraging. The Tories’ plans for green building retrofits touch primarily on residential buildings, and their alternative energy strategy makes little mention of forms of energy beyond hydrocarbons and hydrogen. Their plans for the low-carbon future are vague, and their promise to scrap the Canada Infrastructure Bank bodes poorly for projects that would put Canadians to work on construction sites across the country.

Where the Bloc Quebecois Stand

The Bloc Québecois addresses a number of worker-friendly policies in their platform, with an expected focus on issues in their home province.

The Bloc proposes to address the labour shortage by suspending the CERB, except in sectors still recovering from the pandemic, such as tourism and air travel. They intend to ensure it can be fully reactivated if necessary. In terms of support for laid-off workers, they propose a package of reforms for Employment Insurance that would eliminate the existing waiting period, and they promise to increase the rate of compensation for EI recipients. They also plan to prioritize pay equality between men and women.

On the green energy front, the Bloc is calling for an end to fossil fuel subsidies, and they are promising to reject any new inter-provincial oil transportation infrastructure, including pipelines or intensified rail transport. They will support the low-carbon transmission by focusing on investment in ecological innovation, technology and research in Québec. As for infrastructure in general, they will demand that federal infrastructure investment instead be transferred directly to Québec so the province can determine how best to use it.

Where the Green Party Stands

The Green Party's platform offers an interesting slate of policies for Canadians deeply concerned about a just transition to a low-carbon economy. However, their offerings for Canadian skilled trades workers overall are thin.

The Green platform prioritizes a just transition for the fossil fuel sector and for regions that rely on the sector economically. They plan to introduce a Just Transition Act by the end of 2021. The party promises to replace every high-paying fossil fuel job with a high-paying green job, supported by wage insurance, retraining and early retirement, while planning for a fair transition that protects communities from displacement.

The Greens' infrastructure plans envision 100% of Canadian energy coming from renewable energy by 2030. They plan to create a national coast-to-coast energy corridor for renewables, creating interties needed to connect provincial grids and create a national non-emitting power grid. They further aim to reduce emissions with a national green retrofit program, covering not just homes but also businesses and institutions.

For working Canadians with pensions, the Green Party envisions new legislation protecting federally-regulated pensioners when a company or plan becomes insolvent. In the short-term, the party would bring in a refundable tax credit covering off the amount of any lost pension.

The Green platform outlines plans to establish a Guaranteed Livable Income (universal basic income), but the party has no listed plans for reforming Employment Insurance. Their plans for labour supports include a relatively undetailed promise to "boost apprentice program opportunities" in "sustainable fields," and another promise to expand the Canada Training Benefit to increase reskilling and retraining opportunities. The party does not hang a dollar figure or any further specificity on these promises.
‍
As well, the party's policies do not address labour mobility: They promise to eliminate corporate meal and entertainment expense deductions but do not have a plank in their platform covering tax write-offs for traveling construction workers.

Who's Best for Canadian Workers?

Fought back against the Conservatives’ anti-union legislation.

Made it harder for Canadians to join a union.

Rolled back anti-union laws and supported union membership through apprenticeships.

Fundamentally supports workers’ right to organize and join a union.

Made it harder for workers to refuse dangerous work.

Made historic investments in infrastructure spending, rolling back years of Conservative austerity policies.

Fought the Harper-era legislation that made it harder for workers to refuse to work on an unsafe jobsite.

Promising to cancel $10-per-day child care agreements, including in Quebec, and replace it with inadequate tax credits favouring the rich.

Finalizing national $10-a-day child care, with a majority of provinces already signed on, helping workers save thousands per year.

Have consulted on options for a new Fair Wage policy.

Commitments from the platforms

Committed to doubling the Apprenticeship Job Creation Tax Credit for the next three years.

Committed to doubling the Union Training and Innovation program to $50 million a year.

Through Community Benefit Agreements will guarantee that good jobs, training, apprenticeships and support for local businesses are part of every infrastructure project.

Will invest $250 million over two years to create the Canada Job Training Fund.

Investments in renewable technologies that will create job opportunities.

Will create the Working Canadian Training Loan to provide low interest loans of up to $10,000 to people who want to upgrade their skills.

Working towards Just Transition legislation and the creation of advisory body to support workers in sectors impacted by the transition to Net Zero. Has made substantial investments in training and apprenticeships over the last six years.

Will change EI rules to allow workers who quit their job to go to school to qualify for EI benefits; expand options for workers in designated sectors and regions to take EI funded training in advance of losing a job.

Will introduce the Construction Mobility Tax Credit will allow workers to subtract up to $4,000 per year of temporary relocation expenses from taxable income.

Will introduce a new Labour Mobility Tax Credit to allow workers to deduct up to $4,000 in eligible travel and temporary relocation expenses.

Have consistently and historically supported a tax credit or deduction for skilled trades workers. Introduced numerous pieces of legislation on this issue and have committed to make this a reality.